Do you hunger for that delicious feeling of being well cared for, dining with friends who cook up flavorful dishes incorporating fruit and vegetables from their own gardens?

Then invite yourself over for lunch or dinner at tiny Zatar restaurant, tucked away on Shattuck Avenue near University in Berkeley, where meals featuring organic produce and naturally raised meats have been lovingly prepared since 2002 by Waiel and Kelly Majid.

Zatar’s cuisine can be hard to pigeonhole. Kelly Majid describes it as “eclectic Mediterranean, with dishes inspired from the region, including Syria, Lebanon and Morocco.” She adds, “We are not trying to be authentic to any one country, but rather enjoy the freedom to adjust our recipes. Our food is always Mediterranean in essence, employing ingredients like olive oil, lamb, fresh seafood, sheep’s and goat’s milk cheeses, homemade yogurt, lots of fresh herbs, and other common elements used in Mediterranean cooking across the area.”

With the tantalizing aroma of sautéed onions and leeks lingering in the air, Waiel Majid sits down for a quick chat between his cooking chores. The softened greens he just prepared will be later mixed with sheep’s feta, enrobed in filo and transformed into a creamy and crunchy boreka appetizer.

Majid immediately shatters the classic image of a chef learning his skills at his mother’s knee. “My mother was a terrible cook,” he admits. “I was the youngest of nine children, and by the time I was born, she was bored with cooking for so many kids and went back to school to become a teacher, so she didn’t have much time.” Growing up in Baqubah, Iraq, a fertile, riverside area known for its citrus fruits, pomegranates and figs, Majid says, “It was natural to eat from the bounty of my family’s garden. In summer, we grew cucumbers, green beans, lettuce, tomatoes, eggplant and squash right on the riverbank.”

“I taught myself to cook so I could eat,” he adds with his characteristic deadpan delivery. Inspired by his daily job collecting bread from the village baker, at age nine, Majid built his own clay oven in the backyard to bake bread and cookies.

After high school, Majid had an opportunity to come to the U.S. for training to become a pilot.  These aviation skills were needed to fight a special war — a war against swarms of locusts that could destroy an entire field of vegetables in an hour. To save their local crops, the Iraqi Department of Agriculture recruited a group of physically fit young men to travel to Oakland, California and train to become crop dusters.

When he arrived in California in 1977, Majid spoke only Arabic, but his aviation school offered English courses to its international students. “I also got an American girlfriend to learn to speak better,” he says with the hint of a grin.

American food presented many surprises. “I was amazed that Jack in the Box was open 24 hours,” says Majid. “And one Thanksgiving, with all the families of my friends’ girlfriends, we went to five dinners of turkey and pumpkin pie.”

After graduating from aviation school, he traveled back to Iraq and assumed he would start dusting date palms. But Majid discovered that the aviation training the government had sponsored seemed in actuality to be preparation for the war with Iran. He decided to leave the country, and, saying he was going to visit a friend in London, came back to California instead. He heard later that several of his classmates ended up using their aviation skills to transport wounded soldiers, weapons and supplies for the war.

After training in aerospace mechanics, Majid worked for 15 years in California making booster rockets for the Space Shuttle. “When the company folded, 17 years ago, I decided to open a restaurant with a couple of partners in a vacant space on Shattuck Avenue that used to be a Peruvian restaurant,” Majid said. [This first incarnation was called Europa.] “Everyone thought I was crazy. Open a restaurant in Berkeley? With no experience? I didn’t care. I loved to cook.”

An anthropology major who also grew up cooking from her garden, Kelly came in to try out Europa before her planned move to Texas to continue her studies. She loved the food Waiel prepared and later responded to a “Help Wanted” sign. A vegetarian for 15 years, all it took was one taste of Waiel’s leg of lamb for her to begin eating meat again and drop her Texas travel plans.

With seven years of restaurant experience at Europa, Waiel and Kelly decided to take it over and reincarnate it as Zatar, named for the traditional and ubiquitous spice blend of dried herbs and sesame seeds. One big change they instituted was a switch to organic, local, seasonal produce and all-natural meats.

Their richly colored dining room has only 30 seats, including two romantic window seats set with crimson pillows. Kelly and Waiel covered the old Formica tables with bold Portuguese tiles, hung up hand-beaded lamps from Damascus and decorated the walls with ceramic platters, mostly souvenirs from their trips to Italy, Spain, Morocco and Syria. 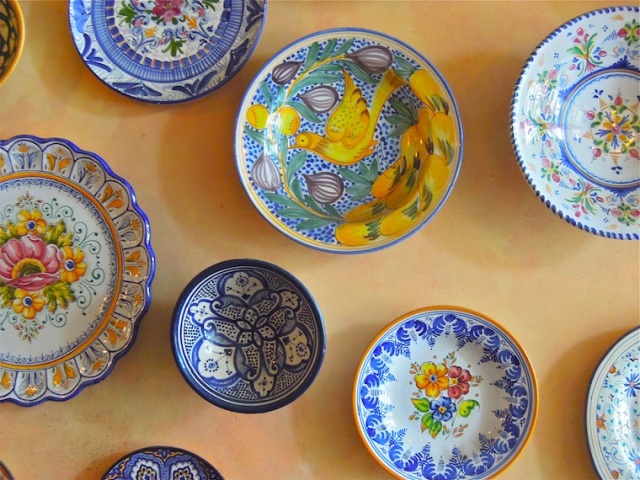 Waiel and Kelly do all the cooking themselves, preparing everything from scratch, such as their organic yogurt. In the dining room, Kelly serves handsome platters festooned with edible flowers and piled with produce from their half-acre organic garden, which includes more than 50 mature fruit trees and a plethora of vegetables, herbs and salad greens harvested daily for Zatar’s kitchen.

Kelly admits that she and Waiel do not have training in business or PR, just a love of gardening and cooking. She recalls an evening 15 years ago when an excited diner called her over. “Where did you get this carrot?” the woman exclaimed, “Oh my God, I’ve never tasted a carrot like this.” When Kelly informed her it was from their own organic garden, the woman told her, “You must put that information on the menu!”

Zatar’s menu offers a medley of small plates to start. The mezza sampler (above) shows off their house-made hummus, lebna (yogurt cheese) and mohamara, a pomegranate, walnut and red pepper spread. Salads feature butter lettuce and mixed greens from their garden.

The kabob feast for two lets you sample tender leg of lamb, moist chicken and flavorful kefta (spiced ground lamb with shallots) over rice. The plate is adorned with a bounty of their grilled, garden-fresh veggies—sweet carrots, crunchy peas and beans, and a parsnip that melts in your mouth. Other dishes include warm lamb dolmas, grilled calamari and a fish tagine. Lunches feature grilled lavash sandwiches and falafel that is crispy on the outside and bright green on the inside, loaded with fresh herbs. Drinks extend the Mediterranean mood, with house-made lemonade with spearmint, tamarind with rosewater and lemon, and traditional Lebanese jalab (date syrup with rose water). Their wine list focuses on handcrafted, small-production, and sustainable family-owned wineries.

To allow the Majids family-time with their two young children, they have recently adjusted their restaurant’s schedule. In addition, they will be closed  for the month of July, during which time they will focus on writing a cookbook that incorporates recipes, gardening tips and stories from the last 17 years.

A version of this article first appeared on Berkeleyside NOSH, June 18, 2013

A sign language interpreter by day; a food writer by night. Endlessly fascinated by looking at the world through the eyes of different cultures -- and tasting its variety. Anna lives in Berkeley, California with her husband and daughter. Author of READING BETWEEN THE SIGNS and now a freelance writer for KQED's Bay Area Bites, Oakland Magazine and other publications.
View all posts by Anna Mindess →
This entry was posted in Immigrants' stories, Lebanese food, Middle Eastern Food, Morocco and tagged baqubah iraq, Berkeley restaurant, boreka, Kelly Majid, Mediterranean cuisine, Waiel Majid, Zatar. Bookmark the permalink.