You may have noticed the charming Frenchman with his trademark knotted scarf at the Grand Lake or Montclair Farmers’ Market, chatting in a melodious French accent with loyal customers as they procure their weekly hoard of his delectable pastries filled with seasoned cheese, vegetables or meat. Guy Birenbaum, a classically trained French chef, is justifiably passionate about his products. One bite of his crust convinces me I must uncover his secret. 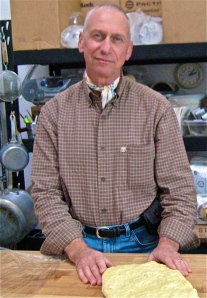 Guy Birenbaum with his unique dough

Birenbaum graciously invites me to visit his production kitchen in Richmond, where he demonstrates how he prepares his pastries with only fresh ingredients. “No dried herbs here,” he tells me, pointing to his shelves, “I use only fresh basil, scallions and dill.” His chickens are free-range, his flour organic, but it’s the mouth-melting flaky crust that keeps customers coming back. He calls his crescent-shaped vegetable filled pastries “brioches” – which may seem a bit puzzling when you picture a brioche, the classic yeasted breakfast bread made with eggs, flour and butter.

The common thread, as in much of French cooking, is the butter. “Without butter, I’m not cooking,” Birenbaum declares. But the secret to his flaky dough lies in the addition of cream cheese. He developed this signature recipe while working as a private chef for high society clients in the US and Europe, preparing, for example, a whole poached salmon en croûte for a gala. Fillings for his single serving pastries include spinach pesto with feta, Madeira mushroom with béchamel sauce, caramelized onions with Swiss cheese. Meat filled pies, shaped in larger domed crusts, conceal delights such as chicken with mushroom and shallots or salmon with potato and dill. 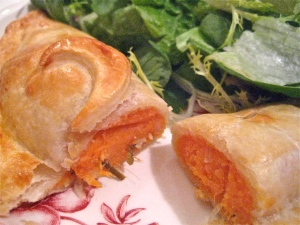 As we stand in his neat production kitchen and chat, Birenbaum, 59, tells me the story of how he became a chef. Born in Lyon, the undisputed culinary capital of France, he began the traditional system of apprenticeship training at the tender age of 14. Fortuitously, he was apprenticed to one of the most acclaimed chefs in France, the legendary Paul Bocuse.

Birenbaum recounts that when a young teenager begins a three-year apprenticeship, he doesn’t begin by whipping up a chocolate mousse. Au contraire, he starts at the bottom rung, learning to clean, sweep and mop. “And if the chef asks for a wet rag, you’d better not give him a dry one,” he adds. 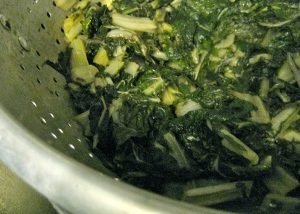 Those three years were not a bowl of cherries. “Bocuse screamed at me everyday of my apprenticeship from 1965-68,” Birenbaum admits, “ I was scared, I shook, I cried, I was a mess.” The master chef would often threaten to throw Birenbaum’s three-year contract in the garbage, but he didn’t. And Birenbaum didn’t give up, although it was not until the last month or two that he started to relax. “And the last day,” Birenbaum recalls, “was the first time Bocuse was nice to me; in fact he gave me a present – Escoffier’s classic book, Le Guide Culinaire in which he had written ’Hoping you will read this – at least a little’ and signed his name.” 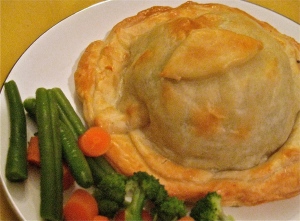 Years later, Birenbaum started his own business which he moved into this Richmond kitchen in 2009. Now with the help of 2 assistants, he turns out at least 1000 pastries a month and personally delivers them by van to a dozen stores, including Star Grocery, Berkeley Bowl and a couple of Whole Foods in Marin county. But the most enjoyable way to acquire these tasty pastries is straight from Monsieur Birenbaum himself, at his weekly Farmers Markets tables, where he holds court with a dash of Gallic panache.

A sign language interpreter by day; a food writer by night. Endlessly fascinated by looking at the world through the eyes of different cultures -- and tasting its variety. Anna lives in Berkeley, California with her husband and daughter. Author of READING BETWEEN THE SIGNS and now a freelance writer for KQED's Bay Area Bites, Oakland Magazine and other publications.
View all posts by Anna Mindess →
This entry was posted in France and tagged Grand Lake Farmer's market, Guy Birenbaum, La Fleur de Lyon, Montclair Farmers' market, Vegetable Brioche. Bookmark the permalink.