It takes a master to marry the flavors of different cuisines and produce a melodious melding instead of a discordant squeal. I’ve met that master and her name is Vanessa Dang. I recently savored her Tuna Salmon Poke, a superb symphony of tastes, in the Solano Avenue restaurant that shares her name.

The motto of Vanessa’s Bistro, a beloved Berkeley dining spot for almost five years, is: “Vietnamese Tapas with a French Twist.” Ironically, the luscious poke I swooned over would not be found in any of the three cultures that phrase conjures up.

Dang’s appetizer combines bite-sized chunks of raw fish with crunchy cucumber match sticks and cubes of silky avocado and sweet mango, festooned with seaweed, cilantro, toasted sesame seeds, onion and green chili slivers (for a little fireworks), all lightly glazed with a tangy sauce. It’s the perfect balance of a few simple ingredients that create an “eyes-closed” eating experience, as my daughter describes food so good that you need to shut out one sense so you can concentrate on the heaven in your mouth.

If you’ve traveled to Hawaii, you’ve probably seen poke [pronounced POH-kay]. The ubiquitous side dish, a melange of cubed raw fish with onion, soy sauce and other ingredients shows up everywhere from mom and pop corner stores to supermarket fish sections and fancy restaurants. The Hawaiian word poke means “cut in small pieces” and it’s been called Hawaiian soul food. Locals have their own versions and there’s even an annual contest for the most imaginative combinations.

The informative site What’s Cooking in America describes its history:

For centuries, Hawaiian fishermen cut their catch of raw fish into cubes and seasoned it with whatever ingredients they had. Modern versions make use of seasonings brought by the many different cultures of the Islands.

Poke is most often made with ahi-tuna, but other fish are also used.

A similar preparation with salmon is called Lomi lomi, mixing raw salted salmon with tomatoes and onion. In the Hawaiian language lomi lomi means massage and the salmon is shredded by massaging the fish with the other ingredients.  Both poke and lomi lomi salmon are essential elements of traditional Hawaiian gatherings.

Saturday night, when I shared the Tuna Salmon Poke with my daughter, executive chef Vanessa Dang happened to be nearby, sitting at the bar, quietly sipping a glass of wine as patrons reveled in her ingenious flavor combinations. She graciously answered my query about how this dish with a Hawaiian heritage ended up on the menu of her Vietnamese restaurant and shed some light on her creative process. “Hawaiian poke is simple,” she said, “basically tuna and salt. But then I looked at what Japanese cuisine does with raw fish: adds seaweed. So we make our own seaweed. The mango and the avocado – those are Mexican. And in the sauce, I add just a few drops of honey to the soy sauce and a little sriracha.” 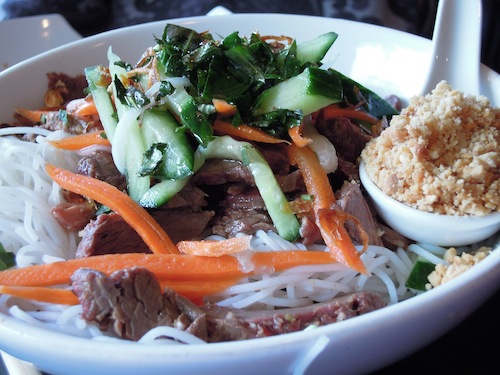 Although the term “fusion cooking” can excuse any cross-cultural hodgepodge, what Vanessa does so exquisitely is extract the best from her native Vietnamese cuisine and combine that with elements from French, Chinese and other cuisines. Her dishes are clean, bright and boldly flavored. You can taste all the individual elements at the same time you appreciate how seamlessly they intertwine. Another of my favorites is her more traditional Vietnamese Saigon Noodle Salad, with honey lemongrass marinated filet mignon, crisp, lightly dressed, salad veggies and ground peanuts atop a bowl of rice noodles. Mix it together yourself and your tongue can still identify the disparate elements that make up the whole.

A sign language interpreter by day; a food writer by night. Endlessly fascinated by looking at the world through the eyes of different cultures -- and tasting its variety. Anna lives in Berkeley, California with her husband and daughter. Author of READING BETWEEN THE SIGNS and now a freelance writer for KQED's Bay Area Bites, Oakland Magazine and other publications.
View all posts by Anna Mindess →
This entry was posted in gluten-free food, Hawaiian food, Japan, Vietnamese food and tagged Poke, Saigon Noodle salad, Vanessa Dang, Vanessa's Bistro. Bookmark the permalink.